James Fenimore Cooper Middle School opened on September 4, 1962. On opening day, the total enrollment in Fairfax County Public Schools (FCPS) was just 72,220 students. Cooper Middle School opened when Fairfax County was in the process of racially desegregating its public schools. Cooper opened as an integrated school, admitting pupils who had formerly been assigned to the all-African-American Luther Jackson High School in Merrifield.

In 1958, the Fairfax County School Board voted to reorganize the public school system and establish the county’s first intermediate schools. Traditionally, Fairfax County students in grades 1-7 attended elementary schools, and students in grades 8-12 attended high schools. Intermediate schools were created to ease the transition from elementary school to high school, and provide students with a specialized program of study.

The intermediate schools will include music, art, and shop facilities but will not be “little high schools.” For instance, there won’t be any inter-school sports in these schools. They were set up because of the physical, emotional and psychological differences of the 7th and 8th grade students and everything in the schools is geared to that age group. ~ FCPS Assistant Superintendent Robert B. Walker, May 1960

What’s in a Name?

Although it was the twelfth intermediate school established by FCPS, School Board records indicate Cooper was actually one of the first to receive its name. On December 16, 1959, the School Board officially named Intermediate #2 the James Fenimore Cooper School. During design and construction, Cooper was also referred to as Balls Hill Intermediate School. What do our namesake, James Fenimore Cooper, and the National Baseball Hall of Fame have in common? Find out in this video produced for the FCPS cable television channel Red Apple 21.

Even though it had been named in 1959, construction of Cooper Intermediate School didn’t get underway until December 1961, when the School Board awarded the project contract for the school to the M. L. Whitlow Construction Company. Cooper was built at a cost of $992,862, and had just 27 classrooms. The original building was designed by the architecture firm of Pickett, Siess and Hook of Falls Church, Virginia. Cooper’s unique design was later reused during the construction of Stephen Foster Intermediate School (now Whitman Middle School).

The first renovation/modernization of Cooper Middle School began construction in the summer of 1988. Funded by the 1986 school bond issue, the renewal was completed at a cost of $4.1 million. The current modernization project is scheduled for completion in August 2022. Explore the evolution of Cooper Middle School in this series of aerial photographs. 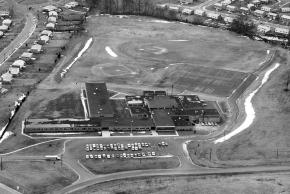 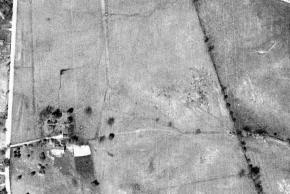 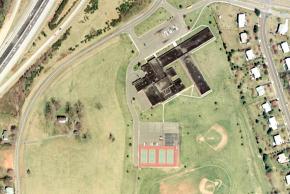 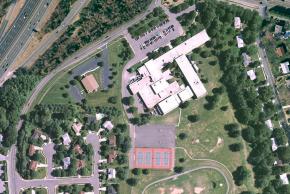 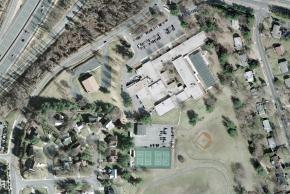